Everything I Know In Life... 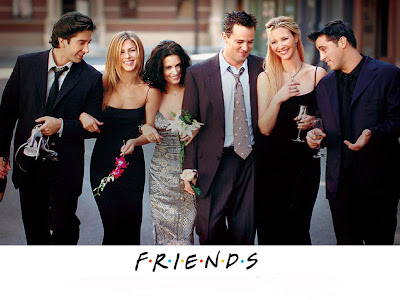 I have a poster that says that as the header & then has a bunch of different bullet points of funny sayings and references to the T.V. show that any fan of the show would find instantly hilarious.
I have also recently  been watching the spin-off of the series, which was called "Joey," where Matt LeBlanc, who played Joey Tribbiani on the ten-season smash hit of "Friends."
Even though everyone else thinks the show was a flop, my brother and I have been enjoying the show very much. We've decided that the we think the reason many people didn't really give "Joey" a chance was because all they were doing was comparing it to "Friends" and were expecting it to just as good or even better.
For Christmas this past year I finally received the gift I had been asking for for the past few years, which was the complete series collection box set of "Friends." My mother's main hesitation was that she was afraid I wouldn't get enough use out of it, because she really didn't think I would want to watch them over and over again. On the contrary. I haven't had the for an entire year yet, and am already going through the series for the second time. That's ten years of one show times two... in less than one year. I'm surprisingly proud of that.
If you haven't gotten on board with the show, I suggest you watch it. It's really an excellent show, and I find myself regularly making referencing to specific occurrences from the show.
Today marked my "one more week left of Summer vacation." I don't mind though, because I'm actually excited for Senior year!
I feel as though time has flown by extra fast, but I'm excited to see where the paths of life take me. I can't imagine things going any different way than they have been. I'm excited for my journalism class this year... I'm really pushing for the position of Editor-In-Chief this year! *Keep 'em crossed! I'm excited for my Musical Theatre class & when we put on our musical The Wizard of Oz...Where I'll be playing Tree #2.. as well as a featured dancer and other miscellaneous stuff like that. I'm excited to be a part of The North Canton Playhouse's (In collaboration with the Palace Theatre) production of Sweeney Todd: The Demon Barber of Fleet Street. The show dates are Oct. 28th-31st! :) I'm excited to get a letter in the mail from Bowling Green University telling me whether I've been accepted or not. I'm excited to turn eighteen. Yes, 18.
With so many things to look forward to this year, I can't help but be excited. I will continue learning important life lessons from F.R.I.E.N.D.S and keep you all updated on the haps of my mind :)
Food for Thoughts :)
Posted by Gina Rasicci at 12:44 AM No comments:

Has someone ever said something about you that you've never forgotten?
You can hear the words flowing from their mouth over and over again in your head...
It gives you that feeling in your stomach that just aches in a sickening way.
It doesn't make sense.
I don't understand why people can't just be nice to everyone.
I mean, I know that's not how the world works... I was always told that.
But really? Seriously people... 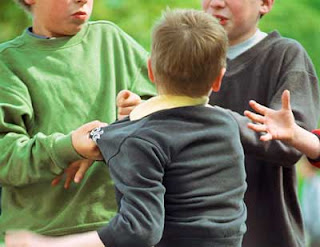 I'm not talking about the physical kind of bullying.
I really feel that "hands-on" bullying is old news. 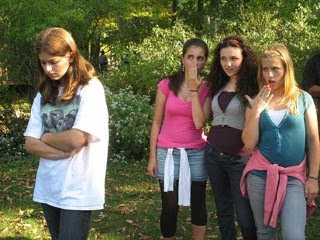 Nowadays, kids are fighting through the internet and cyber bullying is becoming more of the "trend."
I'm really starting to believe that it's getting out of control, too. When kids are committing suicide and causing harm to themselves based on the unnecessary comments of others, that's just not right.
I really wish there was something I could do about it...
So, as a result... No, not a result... because I don't care what other people think about me, I make it a point to be cordial to anyone and everyone. We're here on Earth for such a short time. Why not reach out to someone who may be considered a "social outcast" by the people considered to "high society"...
There's no way to avoid cliques, because that's more of an established group of friends... but they only become "cliquey" when they start hazing and/or harassing others who might be too timid to stand up for themselves.
WHY CAN'T YOU PEOPLE JUST LEAVE EVERYONE ALONE?!
* I use the term "You People" loosely to stand for anyone who bullies an someone or causes misery to any individual.
I wish there was a way that I could get people to stop talking about other people behind their backs, or stop people from making people seem as though they don't have a reason to live.
Although I'm only one individual, I believe that a smile and a friendship can go a long way.
Just being someone's friend is all that anyone can ask for.
People don't ask for betrayal or backstabbing.
All they want and expect out of you is a friend.
Now, if you can just do that for everyone, think of what a better place the world would be.
Food for Thoughts :)
Posted by Gina Rasicci at 1:38 AM 1 comment:

A Picture's Worth A Thousand Words

A Happy Accident
So, for my photo II class last fall, our assignment was to take different styles of portraits, such as still action, blurred action, close up, shoot for color, framing, etc. I chose to use my cousin Becky as my model, because she's stellar gorgeous! Half way through the picture taking process, I had to dump the pictures off on the computer because my camera ran out of space. Her mom loved the pictures so much that she had the idea that I could take her senior pictures. From that point on, we'd get together whenever we could to take some neat pictures. We had lots of fun and I got a lot of experience in taking good pictures and what to look for to make a picture turn out good in its full potential. I'm doing my own senior pictures. I really hope it turns out well. Don't worry.. My dad's gonna be in charge of the camera.. it's not just gonna be on a tripod or something. 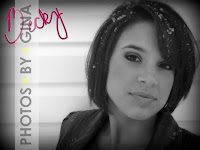 Here's one of the shots.
It was taken on my front porch actually... during the winter. 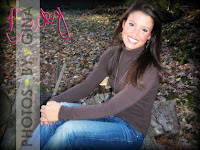 One of the fall shots.
It was taken in my Grandparents' backyard actually.
They have a pretty good photography set up there! 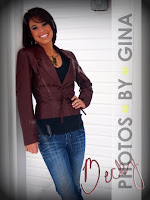 So No One Told You Life Was Gonna Be This Way.

Such an excellent day.

Unless you can't drive anymore and so you're stuck at home!

I spent a lot of the day researching past articles written about Danny Milan, a family friend & local singer/songwriter artist :)

I'm writing a review on his concert that I went to tonight, and hopefully it'll get in the suburbanite (our local paper) 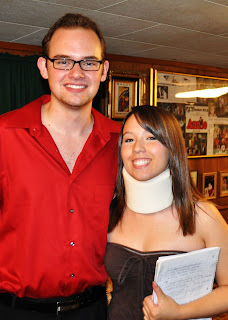 If you wanna listen to any of his stuff, you should check out his website! :D
Danny's Website <--- Go there and check him out!
He has another concert tomorrow evening at Theatre 8:15 on Massillion Road in Green.
You should definitely check it out!

I hope you all enjoyed that pic up there with my neck brace on :P It's one of four pictures total.
Feel special. 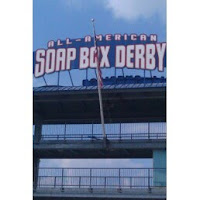 I was at Durby Downs yesterday to be an extra in the movie 25 Hill.
It was the coolest thing ever. 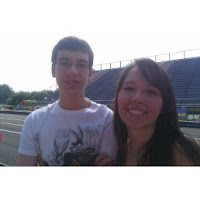 I got to watch the soap box cars come down the hill and cheer as the camera crew went by :)
They had just given all the extras ice cream and were about to start another take when I started feeling sick to my stomach.
The next thing I knew, I felt like I was dreaming...
I slowly was able to crack open my eyes...
There was a very cute guy at my feet, elevating them up...
I just felt very confused and didn't know what was going on though.

I saw a woman standing above me calling out, "Gina.. Gina.. Gina.. can you hear me?"
& I slowly was able to shift my eyes over to the left and pick out my mom.
However, I was still unable to speak.. or move for that matter.

I was lost again after that.

When I came to again, they put an ice cube in my mouth to give me some liquids, but I still couldn't move or control my mouth so that wasn't really helping.
I heard people shouting "Call 911! One of the extras passed out!"
& Yet, there was still nothing I could do.

I wasn't able to move, speak, and I sat with my eyes wide open without blinking for what seemed like an eternity.

Note to readers: The majority of what I'm writing has come from what people told me... I was unconscious... :O

The woman who had been standing above me told my mother she was on the production staff & would be able to take my brother to the hospital to meet us there.
All the while, I was being loaded on to a stretcher and my mother would be venturing to the hospital with me in the ambulance.

That woman, I had later learned to be Nina Rawls, wife to the late famous singer Lou Rawls :)

I'm really exhausted right now, but long story short, I went in my first ambulance ride, had a bunch of X-rays done on my head, was put on an I.V., scratched up my arms and feet, have a huge bump/bruise on the back of my head, and
I'm stuck in a neck brace.

I'm gonna have to go get evaluated by an orthopedic surgeon sometime to follow up.. ehh :/

But I just got acupuncture on my neck points, head, face, legs, arms, and feet.. so hopefully I'll be able to sleep tonight.

But yeah... now I'm stuck at home doing nothing and unable to maneuver.. so it's been pretty lame for me.

Anyway, maybe if you're in the right place at the right time, you'll catch a glimpse of me in my lame neck brace :P Although I can't drive.. so I'm reverting back to my way of life back in the under-sixteen days :P

& By they way: I was diagnosed with a "partial asthma attck and partial heat stroke" brought on by dehydration.
Yin-Tang is my favorite acupuncture point.

Food for thoughts :)
Posted by Gina Rasicci at 11:51 PM No comments: